“Righteousness exalts a nation, but sin is a reproach to any people.” Proverbs 14:34

With just a little more than two weeks before the most important Mid-Term election of our lifetimes, I wish we had perfect candidates we could eagerly support. But we don’t. And as Christians responsible to be good citizens we must cast a vote. So, how do we choose between two flawed candidates?

Ultimately, it comes down to a question of which candidate is most closely aligned to the moral values I hold precious? In my opinion, here are the most important moral issues: 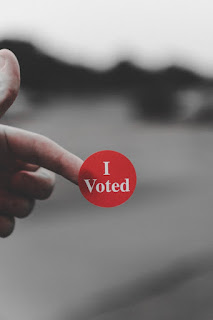 Life – Which candidate holds life most precious by opposing abortion and valuing the infirm and elderly?

Character – Which candidate lives a life that most closely represents the spiritual and moral values I hold dear?

Which candidate seems to be the most truthful in what he says and does?

One indicator of a man’s character is to take note of the people who he has chosen to surround himself with.

Marriage and Family – Which candidate can be trusted to defend Biblical marriage and the traditional family?

Trust – Which candidate can be trusted to be a good steward of the massive power of the Presidency?

Philosophy – Which candidate adheres most closely to the conservative philosophy of a smaller, less intrusive government as outlined in the United States Constitution?

Freedom – Which candidate seems to hold the strongest respect toward individual freedoms as outlined in the U. S. Constitution?

Leadership – Which candidate seems to possess the best leadership skills required to execute his Constitutional duties and effectively administer the U. S. Government with all of its offices and agencies? Also, which candidate can best command the confidence of our allies and demand the respect of our enemies on the world stage?

Economy – Which candidate is best able to restore fiscal soundness to the U. S. economy and show the fiscal discipline to bring the debt and deficit under control thereby restoring confidence of investors and entrepreneurs?

Remember, we are not electing a pastor or spiritual leader. We are seeking to choose the better of two flawed men who have been selected by two far from perfect political parties. Since none of us are perfect, we should not expect to be led by a perfect man. However, the one thing that DOES need to be perfect is your judgment!  That will be the result of much prayer and thoughtful consideration of where each candidate stands on issues such as those I have mentioned.

Don't just vote for Republicans or Democrats or Independents. Vote for righteousness.
Posted by Pastor Brad at 9:00 PM No comments: