5 Steps to Letting Go of Past Pain

“Forget the former things; do not dwell on the past. See, I am doing a new thing! Now it springs up; do you not perceive it? I am making a way in the wilderness and streams in the wasteland." Isaiah 43:18-19 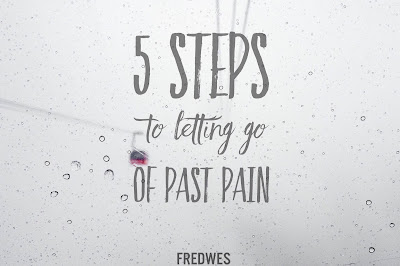 We’ve all been hurt. You've been hurt, I've been hurt, you've hurt others and so have I.  You can’t find an adult — or teen — alive today who hasn’t experienced some kind of emotional pain.
It hurts. We know that. We get that. Because it hurts it's hard to forget the pain.
But what you do with that pain is probably more important than the hurt itself. You might prefer to hold a grudge or try to get even or hope something bad happens to them.

However, as a believer and Christ-follower you are called to the future not the past. As Isaiah reminds you, “Forget the former things; do not dwell on the past. See, I am doing a new thing!
So, in short, how do you let go of past hurts and move on?
Blaming others for our hurt is our default setting. Somebody did something wrong, or they wronged us in some way that mattered to us. We want them to apologize. We want them to feel sorry for what they did to us. We want them to acknowledge what they did was wrong.
But blaming someone else for our hurt can backfire, as Holly Brown notes:

"The problem with blaming others is that it can often leave you powerless. For example, you confront the person (your boss, your spouse, your parent, your child), and they say, “No, I didn’t,” or worse, “So what if I did?”, then you’re left with all this anger and hurt and no resolution."

"All your feelings are legitimate. It’s important to feel them fully, and then move on. Nursing your grievances indefinitely is a bad habit, because (as the title goes) it hurts you more than it hurts them."

People who hold on to these past hurts often relive the pain over and over in their minds. Sometimes a person can even get “stuck” in this pain, in this hurt, in this blame."

In this post I want to share the second of five steps to letting go of past pain and moving on:

1. Make the decision to let it go.

2. Express your pain — and your responsibility.

There are three parts of this process. First, don't deny the pain. It is real and it must be dealt with.

Third, define the pain. Get it all out of your system at once. Doing so will also help you understand what — specifically — your hurt is about.
The world is complicated and relationships are complicated and emotions are, too. While you may not have had the same amount of responsibility for the pain you experienced, there may have been a part of the hurt that you are also partially responsible for. What could you have done differently? Will you do it differently next time? Will you be an active participant in your own life, or simply a hopeless victim? Will you let your pain become your identity or will you trust God to help you turn your pain into gain?

According to Isaiah, the path to your spiritual progress will run through your past pain.
Posted by Pastor Brad at 10:44 PM No comments:

“Forget the former things; do not dwell on the past. See, I am doing a new thing! Now it springs up; do you not perceive it? I am making a way in the wilderness and streams in the wasteland." Isaiah 43:18-19


As you prepare to begin 2017 would you rather be looking at life through the windshield or through the rear view mirror?

What if God has something new and better He might want to give you this coming year?

How much of God's grace have you already missed because you are nursing a grudge?

Can the New Year really be new if you are holding onto and living in the past?

Isaiah wrote under the inspiration of the Holy Spirit,

“Forget the former things; do not dwell on the past."

Over the next few days I want to offer five keys to putting your past in the past.

First, you decide to let it go.

Things don’t disappear on their own. You need to make the commitment to “let it go.” If you don’t make this conscious choice up-front, you could end up self-sabotaging any effort to move on from this past hurt.
Making the decision to let it go also means accepting you have a choice to let it go. To stop reliving the past pain, to stop going over the details of the story in your head every time you think of the other person.
Human nature is to nurse our pain and rehearse the hurt and curse the culprit who hurt us. But God says you can choose not to do that. His Word says He has chosen to forgive you and He can give you grace to forgive others.
Once, when His disciples asked Jesus how many times they were to forgive those who hurt them He replied, "Seventy times seven" He wasn't giving them a number He was telling them to decide once to forgive every time .

Decide to give grace and not hold a grudge as we enter the New Year.

Posted by Pastor Brad at 7:25 AM No comments: