"Then some of the believers who belonged to the party of the Pharisees stood up and said, "The Gentiles must be circumcised and required to obey the law of Moses." Acts 15:5 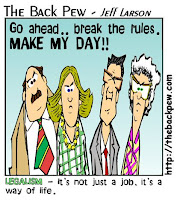 Sometimes we may think that legalism is a new affliction in the Church. Unfortunately, it is as old as the Church itself.

What is legalism? It is substituting man made regulations for God-given principles. Legalism at it's heart is an effort to earn salvation by performing according to a certain standard of rules and rites.
What is the problem with legalism? It nullifies the positive power of grace.
When the First Century Church was experiencing it's explosive growth it began to reach Gentile converts. Many Gentiles were hearing the preaching of the Apostles message of salvation by grace and where putting their faith in Christ.
This got the attention of the Jewish believers in Jerusalem who felt it was their duty to "educate" these new disciples. So they sent their contingent to them to inform them of their need to be circumcised. As you might imagine, this brought great concern and confusion to the young Christians. Like most eager new converts, they were zealous to do the right thing and were not sure how to respond to this new information.
When I was first introduced to the Wesleyan Church nearly 50 years ago, it was far more conservative than it is now. The standards of dress were very modest, long sleeves, long skirts, high collars, and plain colors were preferred. Women didn't cut their hair and wore it up in a role or a bun. Wearing make-up was considered worldly. Married couples were not allowed to wear wedding rings, or any other jewelry.
These are a few of the many rules that defined what a holiness person should look like. Many Wesleyans did look like this and many of them were, indeed, holy. I owe my early spiritual walk to some of these folks.
It is not my desire to criticize them. I have nothing but admiration for people who are holy from the inside out. Sincere spiritual convictions are to be respected.
However, I also saw it veer off course when those convictions were used to judge the spirituality of others. Or, when people began to substitute the outward appearance of holiness for the inner work of heart purification.
Anything that is offered as a requirement for salvation or sanctification in addition to the grace of God, constitutes legalism. God doesn't require our performance, He requires our purification and only the Holy Spirit can do that.
The polar opposite of legalism is license. Often, in an overreaction against legalism, we swing to the extreme of licentious living. That is just as destructive as legalism. Living by grace does not mean we can do anything we want to do. Anything plus grace equals legalism. Anything minus grace is license.
To address these abuses of grace, the Church leaders convened in a council to seek the wisdom and will of God. After prayer, discussion and testimonies from those who were ministering among the Gentiles, they decided on this prescription:
"When they finished, James spoke up: "Brothers, listen to me. Simon has described to us how God at first showed his concern by taking from the Gentiles a people for himself. The words of the prophets are in agreement with this, as it is written: " 'After this I will return and rebuild David's fallen tent. Its ruins I will rebuild, and I will restore it, that the remnant of men may seek the Lord, and all the Gentiles who bear my name, says the Lord, who does these things that have been known for ages. "It is my judgment, therefore, that we should not make it difficult for the Gentiles who are turning to God. Instead we should write to them, telling them to abstain from food polluted by idols, from sexual immorality, from the meat of strangled animals and from blood." Acts 15:13-20
What was their response to the legalism of the Pharisaic branch of the Church?
More legalism? License?
No, neither legalism or license - their response was love.
Legalism in any form disgraces the faith. License disgraces the faith. Only love graces the faith.
The fact is each of us is prone to fall into the extreme of legalism or license because we are raised in a performance based culture. When we perform according to convictions imposed upon us by another person or group to earn their favor or to earn God's favor, we become legalistic.
When we perform in the absence of convictions or standards in rebellion against legalism, that is licentious.
Love doesn't peform. Love lives in relationship with God by His grace. Love graces others.
God, deliver us from the need to perform and help us live in your grace!