"Blessed is the nation whose God is the Lord; the people he chose for his inheritance." Psalm 33:12 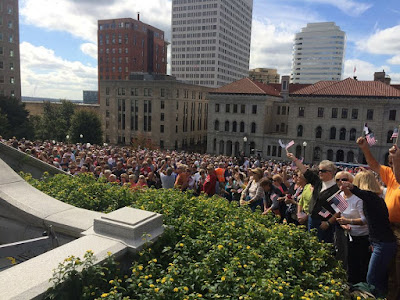 I was privileged to be among thousands of believers from all over the Commonwealth of Virginian today as we gathered on the steps of the Capitol in Richmond to intercede for America. Today was the 49th stop on Dr. Franklin Graham's America Decision 16 50 state tour praying for our Nation on the steps of every State's Capitol.

On a perfect Fall day, God's people called on God and repented of the sins of our nation (Abortion, Same-Sex Marriage, Sexual Perversions, Humanism, Racism, Materialism, Greed, etc.), our personal sins and the sins of our fathers. What a powerful experience as ten to fifteen Christians called out to God for grace and mercy under the leadership of Dr. Graham.

We were exercising our First Amendment right to assemble publicly and practice our religious beliefs. Dr. Graham strongly urged us to engage in the political process and suggested it is a dereliction of our Christian duty if we don't vote. It is irresponsible for a Christian not to stay informed on the issues and be prepared to cast an intelligent informed vote.

The Founders believed that our individual rights were given by God and they designed the government to protect those rights. So, according to the logic of the Founders the goal of government is do the work of God. Contrary to what secular progressives may say, the Church has a place in the governing of a nation.

It is time for the people of God to arise and engage and pray and speak truth to power. Franklin Graham called us to join with tens of thousands of Christians across America to take a pledge. I want you to take your phone and text 21777 and write "america" in the message line. You will receive a copy of the pledge and a comprehensive voter's guide.

Join Dr. Graham, me and thousands of other believers in becoming part of the hope of America turning back to God!

Posted by Pastor Brad at 9:51 PM No comments: