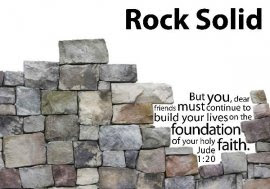 There are many reasons to rejoice over the Resurrection of Jesus Christ. I have shared two:

The Fear of Death Is Gone!

The Freedom of Forgiveness Has Come!

On this day, Good Friday, I want to share a third reason for rejoicing in the Resurrection:

The Foundation of Faith Is Here to Stay!

But every detail of every prophecy, some given centuries in advance, happened exactly as predicted!

Jesus' resurrection was the most significant event in human history. He predicted His resurrection on several occasions prior to pulling it off. If after predicting it He would have remained in the tomb, He would have been proven a fraud.

The veracity of God's Word depended entirely on Jesus fulfilling the mission of the Messiah. Mankind's sins had to be atoned for and death had to be defeated.

When the sinless Jesus from Nazareth died on the cross of Calvary and then rose from the dead on the third day, He satisfied the penalty for sin and smashed the power of death!

Because Jesus accomplished everything the Scriptures predicted, we can rest assured that the foundation of our faith is firm forever!

Since every prophecy and prediction put forth in the Bible has been fulfilled up to the present day, there is every reason to have full expectation that His word is reliable and prophecies yet to be fulfilled WILL BE FULFILLED!

That's a reason for rejoicing!

Posted by Pastor Brad at 9:54 PM No comments: