Hedges A Mother Can Build

"She watches over the affairs of her household and does not eat the bread of idleness." Proverbs 31:27 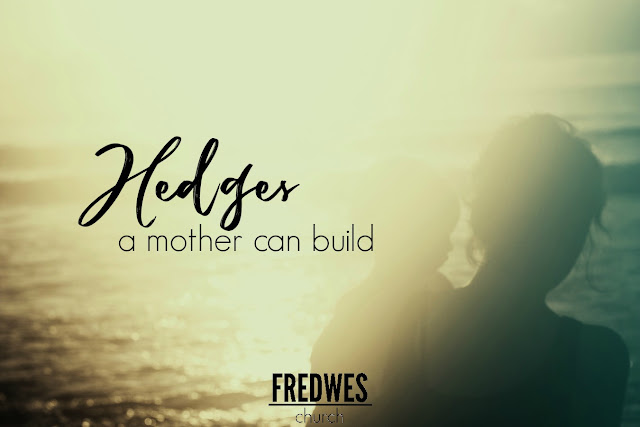 When I think of all the safety devices and equipment available for our infants and children nowadays it amazes me. Cars are much safer than in my day or even in the time my children were small. And in addition to the airbags, shoulder harnesses, and electronic warnings built into cars there are infant seats to add increased protection for our little ones. We do everything we can think of to make our kids safe. That is a good thing every parent understands well.

Keeping our children safe has always been a top priority of every culture in every age. I am sure it will be that way as long as people have children.You spend as much as you can afford to assure the safety of your children and so would I. So no wonder the writer of the Proverbs lauds a woman who "builds hedges of thorns" around her children to protect them.

What ARE some of those hedges a mother can build to protect their loved ones? I want to share three of those in this post.

When you have children your prayer life immediately ratchets up! When those children become teens you get a crash course on intercessory prayer.

Forget the lame disclaimer, "All I could do is pray." Prayer is the BEST thing you can do! Through prayer you activate and marshal all the extensive and powerful resources of Heaven! Angels rush to guard them. The Holy Spirit hovers over them. God's blessing and favor comes to rest on them!

I remember when my oldest son went off for basic training in the Army. He had been struggling through several difficult years prior to his enlistment, so I had already been praying hard for him. But after he left for Fort Jackson, I began to pray for three specific things; that he would be safe, that he would be successful and that God would surround him with good people.

Three months later, when I went to his graduation from basic training, it was obvious he had not only safely survived the training, he had excelled in it. After the ceremony when we met up with me and began to introduce me to his buddies, I remarked to Barbara how impressed I was with each of those young men. Later, as we were driving back to Illinois and discussing the experience it dawned on me that God had answered all three parts of my prayers for him!

Pray a hedge around your children!

By all means, make sure your children find a personal relationship with Jesus Christ. Sing to them about Jesus and show them pictures of Jesus and tell them Bible stories from the moment they are born. Let them never remember a time they weren't aware of Jesus. And as soon as they are old enough to understand the difference between good and evil, point them to a personal relationship with Jesus.

I was seven years old when I accepted Jesus and I knew what I was doing. I am very thankful for a watchful mother who made sure I knew about a personal relationship.

When God brought His people out of Egypt under the leadership of Moses to form them into a great nation, what was one of the first things He did? He gave them the Ten Commandments - the principles He wanted them to build upon.

If it was important for God's people, shouldn't it matter to yours?

Of course a mother knows she can't protect her loved ones from everything, but through faith she can put up a strong hedge. And if she can build a hedge of safety, why wouldn't she?
Posted by Pastor Brad at 9:48 PM No comments: