"Be not unequally yoked with unbelievers: for what fellowship have righteousness and iniquity? or what communion hath light with darkness?" II Corinthians 6:14

A few days after the surprising election result I find it even more amazing rather than less exciting!

God heard the prayers of His people.

That should encourage you to continue calling upon God for righteousness and justice to return to our land.

Liberalism was utterly and completely repudiated by the results of this election. In fact, they have been in the past several elections both Presidential and Congressional. But many Americans, seeing this as perhaps their final opportunity, delivered their message loudly and clearly.

Now, typically, Liberals who totally missed the fact that they were repudiated are trying to strike a conciliatory tone. "Let's unite!" "Let's just get along."


I wish that was possible. I am willing to do whatever I can to help bring a more civil and congenial tone to our culture. In fact, I do.

Liberals do this every time they are voted out of power. Rather than receive the rebuke from the people and learn, they vent their resentment toward the people and then seek to sabotage the success of their opposition by demeaning the one elected and discrediting those who elected him. Then, they audaciously insist that the party just elected to power is obligated to unite with them. If you don't agree to adopt their viewpoint then you are accused of being a tyrant or a bully.

You saw this begin on the day after the election, as soon as they were able to absorb the reality of their defeat. But that is not how the world works, is it? There is an ancient saying, "To the victor goes the spoils." Like it or not, that is how the world operates. Who defeats an enemy and then turns around and waves the white flag of defeat? But that is what the Democrats are insisting we do.

The Republican and conservative voters didn't go to the polls to encourage their candidates to "just get along" with the Democrats that they defeated. Donald Trump and Mike Pence and others elected down the ballot were elected primarily because they wanted the lawless policies of Obama and Hillary to be repudiated and defeated.

Unfortunately, our two major parties have drifted so far apart there is little common ground. How can you unite when there is no common ground, which is exactly the point the Apostle Paul is making in this verse. Light does not unite with darkness it defeats it. Where there is darkness there is no light and when the light shines it dispels all darkness.

I am inviting you to pray that President-Elect Trump and his transition team will have the wisdom, discernment and courage to be true to the mandate given them by the American people and undo as much of the liberal damage that has been inflicted on us as they can in the next four years.

I am inviting you to pray this new administration will be led by the light of God's truth to overcome the powers of darkness.

We do not need compromise with darkness we need to conquer it with the light of truth.

Posted by Pastor Brad at 9:18 PM No comments:

"Greater love hath no man than this, that a man lay down his life for his friends." John 15:13 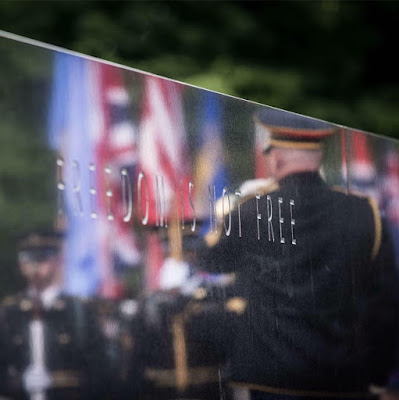 I'm old enough to remember when we got the day off for Veteran's Day. Of course, that was back when people were proud to be Americans and those who served in defense of their nation in one of the branches of the military were honored.

As for me and my house, we say, "Thank you veterans who put your life on hold and on the line to defend the freedom of the greatest nation to ever grace Planet Earth!"

I want to honor those from FredWes who served their nation with military service. At the risk of forgetting someone I want to personally thank Bob Heath, Chuck Baxter, Dale Taylor, Don Price, Mark Taylor, Matt Smith, Phil Otis and Sean McEntee for serving America!

In addition to the appreciation from your Pastor and the FredWes family I believe voters in American on Tuesday took a stand for you as well. Their ballot was, among other things, a statement of support for a strong military, respect for those serving and better care for the veterans who have served.

I'm thankful for a new administration who understands that you build a strong well-armed military in hopes that you never have to use it. You deploy your military across the globe strategically so that if you ever have to go to battle you fight over there and not here.

The past eight years serve as evidence of what happens when the U.S. vacillates in its commitment to a strong, well-trained and well-equipped military that  stands ready to defend the national interest of the United States. Because we had an administration who believed a small and weaker force who assure a more peaceful world we now need a larger and much stronger military force.

War is an unfortunate reality in a fallen world. It is a terrible, brutal, and devastating event that kills people and destroys stuff. Those who have actually fought in combat and know the horrors of battle are the ones who realize the need to do everything possible to build a military so powerful it will serve as a deterrent to aggressors and avoid conflicts.

Pray that with the rise of a more patriot and pro-military administration we will make our depleted Army, Navy, Air Force and Marine Corp great again.

God bless our veterans and God bless America!
Posted by Pastor Brad at 11:23 AM No comments: