"Sons are a heritage from the LORD, children a reward from him." Psalm 127:3 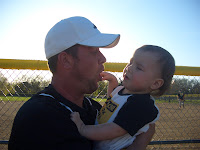 Matt  and His Son, Payton
The phone call came thirty-five years ago today. Those were the days before ultra-sound so when I received the news that the child we were hoping to adopt was a son, I was thrilled!
Three days later we received him into our lives and we have never been the same! I gave him my last name and he has given me many first joys. We bonded quickly. We were inseparable for those first several years until his sister and brother showed up and divided my attention a bit.
Choosing a name for him was simple. "Matthew" means "gift from God" and that is what he is!
One of the first things I noticed about Matt was that he was very co-ordinated. He walked early and could catch and throw a ball before he was two. He was late in getting his hair and his teeth so he was like a little old man running around playing catch with his dad.
Actually, Matt has always excelled at anything he set his mind on. But being a high energy boy, his focus was prone to wander. He was an all-star baseball pitcher as a youngster and though he was a bit small for football, did well in that sport, too.
The only limitations on his growth and development were probably my deficiencies as a dad. There were some difficult years during the adolescent and teen years, but several years in the Army shaped him and tappen into the potiential I knew was there.
Since he lives in the Minneapolis area I don't get to see him nearly as often as I would like. It has been way to long since we have been together. But through the marvels of technology we keep in close contact.
Matt has become a good husband, a great dad of four daughters and a son, and he is highly successful in his business. As you can tell, I am very proud of him.
On this, his 35th birthday, I want to thank God for allowing me to be Matt's dad and want to pay tribute to Matthew, our true "gift from God"!
Happy Birthday, son! I love you and I am very proud of you!

Posted by Pastor Brad at 8:41 AM No comments: