"One day as Jesus was standing by the Lake of Gennesaret, the people were crowding around him and listening to the word of God. He saw at the water’s edge two boats, left there by the fishermen, who were washing their nets. He got into one of the boats, the one belonging to Simon, and asked him to put out a little from shore. Then he sat down and taught the people from the boat. When he had finished speaking, he said to Simon, “Put out into deep water, and let down the nets for a catch.” Simon answered, “Master, we’ve worked hard all night and haven’t caught anything. But because you say so, I will let down the nets.” When they had done so, they caught such a large number of fish that their nets began to break. So they signaled their partners in the other boat to come and help them, and they came and filled both boats so full that they began to sink. When Simon Peter saw this, he fell at Jesus’ knees and said, “Go away from me, Lord; I am a sinful man!” For he and all his companions were astonished at the catch of fish they had taken, and so were James and John, the sons of Zebedee, Simon’s partners. Then Jesus said to Simon, “Don’t be afraid; from now on you will fish for people.” So they pulled their boats up on shore, left everything and followed him." Luke 5:1-11 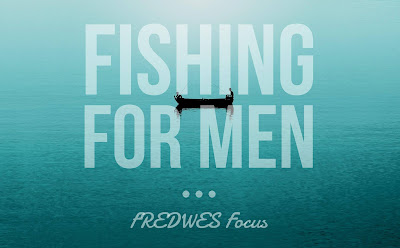 At first thought I wondered why would Jesus call rough, smelly fishermen to be among His first followers.

The more I thought about it several reasons came into focus. Here's a new insight that came to mind and I want to see what you think.

Fishermen make a living catching aquatic creatures that dwell in a different realm. Fish cannot live out of the water and fishermen cannot survive long under the water. In order to run a successful fishing enterprise Simon, Andrew, James and John had to figure out ways to get large numbers of fish out of their under water world and into the world where they lived.

Jesus knew that would also be the challenge of fishing for men.

People who are far away from God live in a different realm than people who know Jesus as their Savior. Non-believing people operate in a much different value system, world-view and mindset than those who live by faith. And yet the call of Jesus was to fish for men, which requires His followers to learn how to lead unbelievers into the realm of faith.

Who better to do know how to do that than fishermen?

Jesus prayed for His followers to be "in the world but not of the world". This is what He must have meant. Like these fishermen, we need to learn to navigate in and interact with those who exist in a different realm without becoming a part of that realm.

There is not abundant evidence recorded in the gospels that the disciples excelled in the fishing for men assignment but we know they must have because the Gospel message has made it intact to our present generation.

Our human nature is to retreat to comfortable places with people who make us comfortable. Even as Christians we can settle into the security and comfort of our own little "holy hideout" and avoid interacting with those who don't live in our realm. But the call of Jesus is a call out of our realm to "evangelize", to "witness" or "fish" for those in another realm.

The Master was masterful in connecting with those who did not know Him or did not believe in Him. In fact, He was regularly condemned for eating with publicans and sinners. Perhaps that's why He said, "Follow me and I WILL MAKE you fishers of men."

Are you will to follow so He can teach you to fish?

Will you continue following every day until you learn to fish?
Posted by Pastor Brad at 10:11 PM No comments: