"Pilate was surprised to hear that he was already dead. Summoning the centurion, he asked him if Jesus had already died. When he learned from the centurion that it was so, he gave the body to Joseph. So Joseph bought some linen cloth, took down the body, wrapped it in the linen, and placed it in a tomb cut out of rock. Then he rolled a stone against the entrance of the tomb. Mary Magdalene and Mary the mother of Joseph saw where he was laid." Mark 15:44-47

We have commemorated Maundy Thursday and have remembered Good Friday while we prepare for a glorious Resurrection Sunday celebration.
But here we are at Saturday. We are suspended between the cross the crypt and the celebration.
So what about Saturday?
Thursday has a name and a story, as does Friday and Sunday is the greatest story ever told! But then there's Saturday.
I did some research and discovered some refer to it as "Holy Saturday" but I have never heard it called that.
But, the more I thought about Saturday the more I realize that far from being an insignificant day Saturday of Holy Week symbolizes every day.
How so?
That Saturday of Holy Week, "Holy Saturday"if you will, was spent between the hurt of the cross and the hope of the resurrection. Isn't that were you live much of your life? Aren't many of your days spent marked by the sting of disappointment, the pain of loss or the frustration of failure?
What is it that keeps you going on the Saturdays of your life? Is it not the hope that tomorrow will be better. Isn't it the hope that something good will happen, maybe even something good enough to compensate for the pain?
If you are a Christ-follower you know about Good Friday and Easter Sunday and you understand that because of Christ's Resurrection every Friday will have it's Sunday! Any loss or any death will be followed by a Resurrection!
But in between is Saturday, the period between the pain and the promise. Sometimes Saturday is twenty-four hours, sometimes it's twenty-four days, sometimes it's twenty-four weeks or twenty-four months or even twenty-four years. But however long Saturday is, the hope that there will be a resurrection carries you through the hurt of that Friday.
So, do you see the significant symbolism of the Saturday between Good Friday and Easter Sunday?
We dread those Fridays of loss and pain and death but oh how we love those Sundays of resurrected life and hope!
Most of your life will be lived on a Saturday! So remember the truth of the Easter Story, for every Friday there will be a Resurrection Sunday!

Faith In Life Over Fear Of Death

“Do not let your hearts be troubled. You believe in God; believe also in me." John 14:1 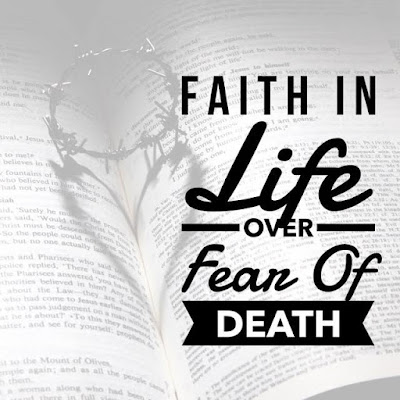 The first thing I notice in this Scripture verse is the clear and simple statement that fear is a choice. "Do not let your hearts be troubled", He says. Why would Jesus make that statement if it were not possible for you to choose to not allow fear to dominate your emotions?

If you can choose not to fear, how does that happen?

Jesus admits as much when you understand the context of this portion of Scripture. He has just told his disciples that He is going to be dying on a cross to atone for the sins of the world, and THEN He will be going to Heaven to prepare a place for them to enjoy when they get there. Certainly, Jesus would not have promised His disciples that He was going to prepare a place for them if He believed that He would not arise from the dead. Jesus knew that God was bigger than death. He was confident that after His death on the cross He would again be alive and returning to Heaven.

Choose faith in Life over the fear of death and your heart will not be troubled! Jesus was not afraid to go to the cross because He knew Who His Father was and how powerful His Father was! Jesus feared being separated from His Father, as would necessarily happen when He took the sins of the world upon Himself. Dying as a sinner would cause Jesus to be separated from the Father. That is something He had never experienced and greatly dreaded - as you can imagine.

You fear being separated from life and that is why death holds such fear for you. But what if you were to believe that being separated from this life means being united with God and with Jesus? What if you believed that the God you love and trust is bigger than death? What would it do for your level of fear if you dared to believe that God is bigger than life itself? And not only is He bigger than life - HE IS LIFE!  Death perishes in His presence!  It is in Him we "live and die and have our being" as Acts tells you.

Let not your heart be troubled!

Choose to not be fearful over death!