The Prerequisites To Become a Believer

"As Jesus went on from there, he saw a man named Matthew sitting at the tax collector’s booth. “Follow me,” he told him, and Matthew got up and followed him. While Jesus was having dinner at Matthew’s house, many tax collectors and sinners came and ate with him and his disciples. When the Pharisees saw this, they asked his disciples, “Why does your teacher eat with tax collectors and sinners?” On hearing this, Jesus said, “It is not the healthy who need a doctor, but the sick. But go and learn what this means: ‘I desire mercy, not sacrifice.’ For I have not come to call the righteous, but sinners.” Matthew 9:9-13 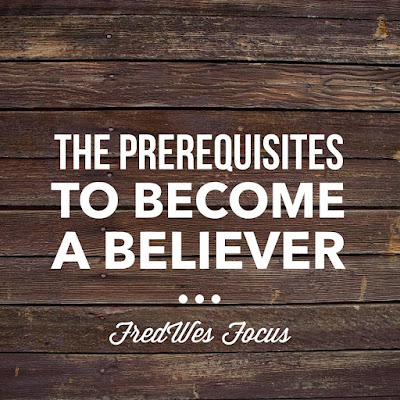 Jesus caused quite a commotion when He invited a despised tax-collector to become His follower. The commotion turned into consternation when Jesus went to Matthew's house for dinner with Matthew and his tax-collector friends.

The Pharisees didn't understand it and the disciples weren't sure either.

What was Jesus doing risking His reputation by dining with tax-collectors and other sorts of sinners?

Was there a point He was trying to make?

There were several actually:

1) Being a sinner doesn't disqualify someone from following Jesus, it's a prerequisite.

2) Being an unbeliever doesn't disqualify someone from following Jesus. None of His earliest followers were believers when they began following Him.

Matthew and all of his tax-collector friends didn't know what they believed but they knew Jesus was Someone worth following. He was the only person in town willing to have dinner with them.

When Jesus issued the invitation to Matthew to follow Him, he was busy collecting taxes. It's possible he even collected some tax money from Jesus. But when Jesus told him, "Follow me!" Matthew got up, left his money on the table and followed Jesus leaving a very lucrative career.

Matthew became a follower before he became a believer. This was Jesus' home base so Matthew had probably heard about this revolutionary Rabbi. Perhaps he had even heard Him preach. So, you could say that Matthew probably believed as much as he knew about Jesus.

But the one thing that made Matthew a follower was that he heard the call of Jesus and he FOLLOWED Him.

If you were to read through the Gospel, which I encourage you to do, you will discover that all of His disciples began following Him before they believed in Him. In fact, even two or three years into following Him you will see phrases like "and then His disciples believed". Peter, James and John got a sneak peak at Who Jesus was at His transfiguration, but the majority of his followers didn't truly believe until after the resurrection. Seriously, how hard is it to believe when you saw Him die, knew that He was buried and then you saw Him alive again?

So, just struggling to believe in Jesus does not disqualify you from following Jesus. If you will believe what you do know and if you are willing to follow Him you can become a follower of Jesus!

You know what you have been believing isn't working.

You know that there has to be more to life than what you are experiencing now.

Will you answer that call today?