"After this, Jesus went across the Sea of Galilee (some call it Tiberias). A huge crowd followed him, attracted by the miracles they had seen him do among the sick. When he got to the other side, he climbed a hill and sat down, surrounded by his disciples. It was nearly time for the Feast of Passover, kept annually by the Jews. When Jesus looked out and saw that a large crowd had arrived, he said to Philip, “Where can we buy bread to feed these people?” He said this to stretch Philip’s faith. He already knew what he was going to do. Philip answered, “Two hundred silver pieces wouldn’t be enough to buy bread for each person to get a piece.” One of the disciples—it was Andrew, brother to Simon Peter—said, “There’s a little boy here who has five barley loaves and two fish. But that’s a drop in the bucket for a crowd like this.” Jesus said, “Make the people sit down.” There was a nice carpet of green grass in this place. They sat down, about five thousand of them. Then Jesus took the bread and, having given thanks, gave it to those who were seated. He did the same with the fish. All ate as much as they wanted. When the people had eaten their fill, he said to his disciples, “Gather the leftovers so nothing is wasted.” They went to work and filled twelve large baskets with leftovers from the five barley loaves." John 6:1-13 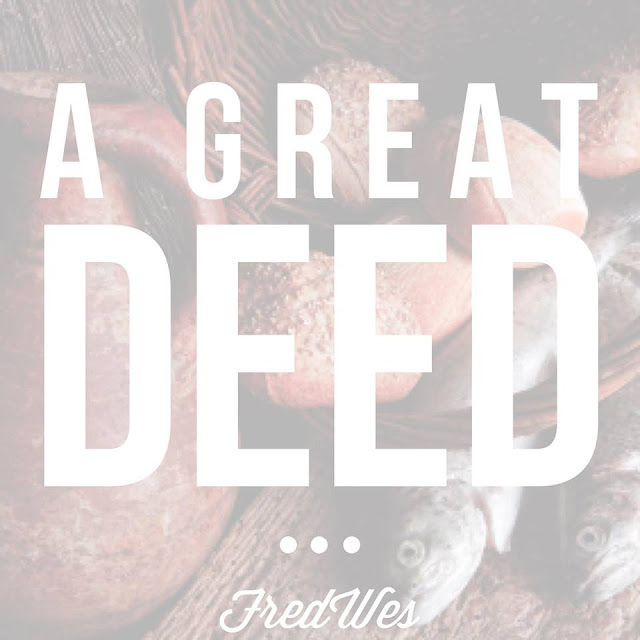 "When there is a need that is sensed by a few and each individual understands his responsibility and gives his best regardless of the odds then God can do a miracle and meet the need." John Maxwell

As we learned in the last lesson, miracles always happen in response to needs.

So, to have a miracle there must be a great need.

In addition to the great need there must be a great deed.

When God wants to do a miracle He always uses a person.

You can't have a miracle without God and He won't do one without choosing a person to work through!

Jesus asked Philip, "How are we going to feed all these people?" Philip's reply was that they didn't have enough money. And, of course, they didn't.

About that time Andrew brought a boy to Jesus who had a modest lunch consisting of five loaves and two salted fish.

Would he be willing to turn over his lunch to Jesus?

What difference could one lunch make among thousands of hungry people?

Everyone recognized the great need but now it was time for a great deed and the lad loaned his lunch to Jesus.

Jesus planned to do a miracle but He was looking for some person to partner with Him. His good deed allowed the miracle to happen!

When Jesus wants to meet a great need He looks for someone willing to do a great deed of faith.

Are you willing to partner with God?

What are you willing to offer Him?

Is there anything you are unwilling to offer Him?
Posted by Pastor Brad at 9:36 PM No comments:

"After this Jesus went away to the other side of the Sea of Galilee (also called the Sea of Tiberias). A large crowd was following him because they were observing the miraculous signs he was performing on the sick. So Jesus went on up the mountainside and sat down there with his disciples. (Now the Jewish feast of the Passover was near.) Then Jesus, when he looked up and saw that a large crowd was coming to him, said to Philip, “Where can we buy bread so that these people may eat?” (Now Jesus said this to test him, for he knew what he was going to do.) Philip replied, “Two hundred silver coins worth of bread would not be enough for them, for each one to get a little.” One of Jesus’ disciples, Andrew, Simon Peter’s brother, said to him, “Here is a boy who has five barley loaves and two fish, but what good are these for so many people?” Jesus said, “Have the people sit down.” (Now there was a lot of grass in that place.) So the men sat down, about five thousand in number. Then Jesus took the loaves, and when he had given thanks, he distributed the bread to those who were seated. He then did the same with the fish, as much as they wanted. When they were all satisfied, Jesus said to his disciples, “Gather up the broken pieces that are left over, so that nothing is wasted.” So they gathered them up and filled twelve baskets with broken pieces from the five barley loaves left over by the people who had eaten." John 6:1-13

One of the reasons we like a miracle is because there are times you need a miracle.

That's exactly the point at which miracles happen - when there is a need!

Here's a little project for you, get your Bible and search it to find a time in the Old Testament or the New Testament when a miracle happened in the absence of a need.

While we love miracles we hate being needy. Do you see a problem developing here?

Unless we are willing to suffer with needs we will never see God move in miraculous ways.

In this well-known and beloved story of the Feeding of the 5,000 miracle we see this truth illustrated. Obviously, there was a great need! Upwards of 20,000 people when you factor in the women and children in Jesus' audience and they were all very hungry!

Even if there had been a McDonald's nearby or a food truck parked at the scene, feeding that many people would have been a major project! But there were all those hungry people and no food in sight!

My friend, John Maxwell summarizes the pattern for a miracle as this: "When there is a need that is sensed by a few and each individual understands his responsibility and gives his best regardless of the odds then God can do a miracle and meet the need."

Think about it. As a parent don't you find joy and satisfaction in providing something your children need that they could never get on their own?

Where do you think that desire came from? Could it be evidence of God's image placed within your psyche at Creation?

"Brad, it sounds like you are saying we don't see more miracles because we don't like to admit we are needy."

Thanks for paying attention!

Perhaps you needed to hear this!

Maybe you didn't realize that rather than being disgraced by your neediness you need to embrace it and entrust it to Him!

No need, no miracle!

So, if you have a need you are a candidate for a miracle!

Posted by Pastor Brad at 7:46 PM No comments: