And so the King of glory became the servant of men - "In your relationships with one another, have the same mindset as Christ Jesus: Who, being in very nature God did not consider equality with God something to be used to his own advantage; rather, he made himself nothing by taking the very nature of a servant being made in human likeness. And being found in appearance as a man, he humbled himself by becoming obedient to death - even death on a cross!" Philippians 2:5-9 and "For even the Son of Man did not come to be served, but to serve, and to give his life as a ransom for many.” Mark 10:45

Christmas is Immanuel - GOD WITH US!

"Therefore, just as sin entered the world through one man, and death through sin, and in this way death came to all people, because all sinned— To be sure, sin was in the world before the law was given, but sin is not charged against anyone’s account where there is no law. Nevertheless, death reigned from the time of Adam to the time of Moses, even over those who did not sin by breaking a command, as did Adam, who is a pattern of the one to come. But the gift is not like the trespass. For if the many died by the trespass of the one man, how much more did God’s grace and the gift that came by the grace of the one man, Jesus Christ, overflow to the many! Nor can the gift of God be compared with the result of one man’s sin: The judgment followed one sin and brought condemnation, but the gift followed many trespasses and brought justification. For if, by the trespass of the one man, death reigned through that one man, how much more will those who receive God’s abundant provision of grace and of the gift of righteousness reign in life through the one man, Jesus Christ!" Romans 5:12-17

Jesus was born to be the second Adam!

Why would He want to do that?

Because the first Adam blew it big time!

The second Adam had to undo what the first Adam did.

The first Adam was hand-crafted by God. Therefore, he was created with a sinless nature so He could walk with God. 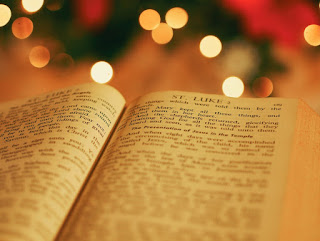 The second Adam was conceived by the Holy Spirit in the womb of a virgin, therefore, He was born sinless. Not only could He walk with God, He came from God and was in fact, God in the flesh!

The first Adam was placed in Paradise and enjoyed a personal intimate friendship with God every day - until he rebelled and was expelled.

The second Adam was in Paradise but left it to come to earth. He gave up His paradise to suffer and die in our world in order to regain access to Paradise for you and me!

The first Adam was perfect but sinned because he wanted to be God.

The second Adam WAS God but became man - albeit a perfect man - for one reason, so He could die to atone for our sins! He had to be sinless so He could take our sins upon Himself!

The good news of Christmas is that God is the God of second chances! Jesus proved it!

Posted by Pastor Brad at 9:18 PM No comments:

"Consequently, faith comes from hearing the message, and the message is heard through the word about Christ." Romans 10:17

I really hadn't planned to go this direction this morning but as I was reading about the angelic visits to Zachariah and to young Mary, and for that matter, the shepherds, this verse popped in my mind and tied some things together. Perhaps this thought will help you as well!

What I was looking at was the initial response from these who were visited by angels and then their ultimate response. Each of them moved from fear to faith. They each changed from being terrified to being edified. How did that happen?

We can understand the fear part. Each of them were minding their own business in the course of their daily responsibilities and suddenly an angel appears. That has to startle you a bit. We know that they were frightened because in each case the angel reassures them with the words, "fear not!"

Imagine you are at work today or on the treadmill or eating your frosted flakes and a brilliant, beautiful heavenly being pops up in front of you. How would you be?

But that is the easy part to understand. What we need to know is what happened to move them from fear to faith.

In each case it is the same. They listened to the message that the angel brought. Each one of them heard the Word of the Lord. Their faith came by hearing!

Is there a message there for us? I think so!

Fear comes from looking, faith comes from listening! Looking at an angel can certainly be frightening. It's not like they saw them everyday. For all we know this was the only angelic appearance of their lifetimes. But as they listened to the message of hope, and peace, and news of great joy, they moved from fear to faith.

If you or I look at the world in which we live or a particular circumstance that might face us, fear can rise up within us. If we walk by sight we can be overcome by fear. But as Paul reminds us, "we walk by faith not by sight". And where does faith come from? LISTENING to the Word of God!

Zachariah, Mary, the shepherds all give us proof from the Christmas story! That is another aspect of the "good news of great joy" announced by the angels! We don't have to live in fear!

Are you struggling with fear? Does what you see around you have you frightened?

Get into God's Word. Hear what He has to say to you today!

Let His voice move you from fear to faith!

Posted by Pastor Brad at 6:26 AM No comments:

"For nothing is impossible with God." Luke 1:37

Much of the lore and legend surrounding Christmas centers around impossible things happening. 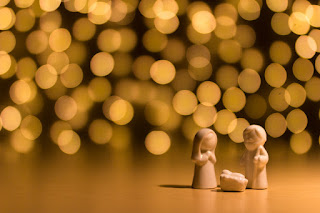 For example, the story of a benign and jolly man who lives around the North Pole with a large population of highly skilled elves and a herd of flying reindeer. This industrious bunch craft a wide variety of toys to distribute to every child in the world during the night-time hours of Christmas Eve. Sound impossible? Ah, but don't forget that he has the benefit of the supersonic flying reindeer to propel his sleigh!

In fact, the REAL story of Christmas featured some fairly fantastic unfolding of events.

For example, the birth of John the Baptist. Consider this account from Luke 1:11-25

"11Then an angel of the Lord appeared to him, standing at the right side of the altar of incense. 12 When Zechariah saw him, he was startled and was gripped with fear. 13 But the angel said to him: “Do not be afraid, Zechariah; your prayer has been heard. Your wife Elizabeth will bear you a son, and you are to call him John. 14 He will be a joy and delight to you, and many will rejoice because of his birth, 15 for he will be great in the sight of the Lord. He is never to take wine or other fermented drink, and he will be filled with the Holy Spirit even before he is born. 16 He will bring back many of the people of Israel to the Lord their God. 17 And he will go on before the Lord, in the spirit and power of Elijah, to turn the hearts of the parents to their children and the disobedient to the wisdom of the righteous—to make ready a people prepared for the Lord.” 18 Zechariah asked the angel, “How can I be sure of this? I am an old man and my wife is well along in years.” 19 The angel said to him, “I am Gabriel. I stand in the presence of God, and I have been sent to speak to you and to tell you this good news. 20 And now you will be silent and not able to speak until the day this happens, because you did not believe my words, which will come true at their appointed time.” 21 Meanwhile, the people were waiting for Zechariah and wondering why he stayed so long in the temple. 22 When he came out, he could not speak to them. They realized he had seen a vision in the temple, for he kept making signs to them but remained unable to speak. 23 When his time of service was completed, he returned home. 24 After this his wife Elizabeth became pregnant and for five months remained in seclusion. 25 “The Lord has done this for me,” she said. “In these days he has shown his favor and taken away my disgrace among the people."

When God needed a prophet to prepare the way for the coming of the Messiah, He did it in an impossible way! Out of the weakness of an elderly priest and his barren wife, came John the Baptist. These good and faithful people had borne the shame of infertility their entire married life. Having a son was a sign of God's sanction and blessing upon your life and marriage. So, here is a highly spiritual couple having to live under the shadow of doubt regarding their lack of a son. It was a burden that they had suffered together through the years. I am sure they had lost count of the times they had cried out to God, apparently to no avail.

Don't you think they struggled through some faith issues? You have had enough disappointments with God that you can identify with their heartaches. But in the end, as all people of faith do, they came to grips with the will of God for their lives.

After all that, and now that conception was a physical impossibility for this aged couple, they impossible announcement comes to Zechariah from no less that Gabriel himself! Their prayers had been heard, their faith had been honored and their dreams would come true. What had been impossible to them was about to happen for them! Why? How?

Because "nothing is impossible with God"!

The good news of Christmas is that God is not limited by our weakness! He is not diminished by our humanity!

As you gear up for your celebration of Christmas - celebrate this - Christmas proves that "nothing is impossible with God!"

Posted by Pastor Brad at 9:36 AM No comments: