"Righteousness exalts a nation, but sin is a reproach to any people." 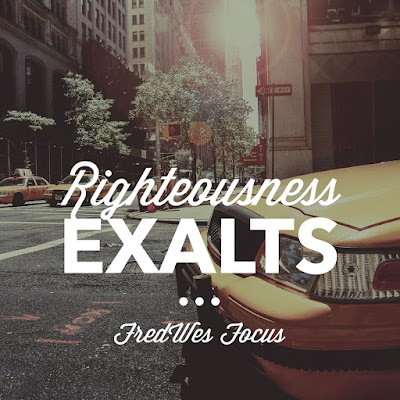 At the close of the second of two major party political conventions I thought these thoughts might be appropriate.

This short verse tells us a lot about two radically different ways of living.

So, righteousness exalts justice and elevates the nation while sin brings corruption that destroys a nation.

Which nation would you rather live in?

Righteousness exalts because in order to become righteous you have to confess sinfulness and repent of sin. That promotes justice and attacks corruption. Righteousness can lift up what sin has torn down.

Can you see the clear difference between the results of righteousness and corruption?

Can you see why righteous people make better citizens than corrupt and sinful people?

Can you see that righteous people are not only better people, they're better patriots?!

Posted by Pastor Brad at 9:33 PM No comments:

As I noted earlier there are three things necessary to be a follower of Jesus.

You must acknowledge Him as your leader.

You must follow Him exclusively and enthusiastically go where ever He leads you.

You must do what your leader does and what He wants you to do.

If you say you are following but are not fulfilling those three requirements you are not actually following.

When you understand those three facts about following it becomes clear to you why Jesus requires you to deny yourself and take up your cross.

It is your nature to want to lead rather than follow. So, if you are going to follow Jesus you must deny that part of your nature. Those ambitions must be nailed to a cross.

And, it is your nature to go where you want to go not where you are told to go. In fact, you resent it when someone tries to make you go somewhere. So, if you are going to follow Jesus where He wants to lead you, you must deny your desires and submit to His direction. Followers go where their leader leads!

Finally, attitudes that are not worthy of Jesus must be denied and actions that dishonor Him must be put to death.

Following Christ is a matter of dying and denying your selfish sinful nature on a daily basis. Jesus' earthly walk led Him to a cross and following Him will lead you to some crosses.