"And the peace of God, which transcends all understanding, will guard your hearts and your minds in Christ Jesus." Philippians 4:7

When a perfect storm blows into your life your stress level goes through the roof and anxiety tries to take you hostage.

I call your attention to the first five words of this verse "AND THE PEACE OF GOD"! Your first defense against anxiety is not you trying to muster up some peace of mind but it is God downloading HIS peace into your heart, mind and spirit. This peace is HIS personal peace and in fact, it is His Person - the Holy Spirit!

The original language gives us encouraging insights into God's personal and powerful peace. Here is the breakdown of those words:

“huperecho” = compound word “huper” (Over, above, beyond) and “echo” (I have, I possess) = Literally – God’s peace is so above, so superior, so elevated, so excellent that no one peace can be compared to it, nothing else is even close!

GOD’S PEACE IS BIGGER THAN LIFE!

“phroureo” = soldiers, sentries, security detail who stand guard constantly and continually over the entrance to your control center.
So, literally translated Philippians 4:7 goes like this, “And the peace of God – a peace that is so wonderful that is cannot be compared to any other known type of peace; a peace that stands in a category by itself rising far above and goes beyond anything the human mind could ever think, reason, imagine or produce by itself – will stand at the entrance of your heart and mind, working like a guard to control, monitor, and screen everything that tries to gain access to your mind, heart and emotions”

HOW OFTEN DO YOU THINK GOD WORRIES OR GETS ANXIOUS?

DON'T YOU THINK HIS PEACE CAN KEEP YOU FROM BECOMING ANXIOUS?

Posted by Pastor Brad at 9:38 PM No comments: 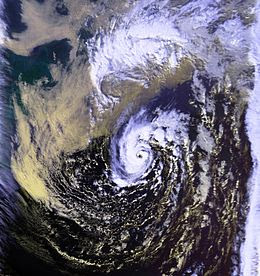 Do you recognize the image in the picture above?

That is the "No-Name" hurricane of Halloween 1991. It was not given a name so as to not confuse it with a previously named storm, Hurricane Grace. Grace was weakening as it moved north up the U. S. coast and it was absorbed by a powerful nor'easter off of the coast of Canada. A deep low pressure system swallowed up by a deeper and stronger low pressure system created what was called "The Perfect Storm" and it wreaked havoc from Nova Scotia all the way down to Puerto Rico claiming 13 lives and doing an estimated $200 million dollars in damage.

The photo above is what the storm looked like from a satellite in earth orbit. It looked much different for those unfortunate enough to be caught out on the Atlantic in record high waves. One wave measured 100.7 feet high and it was such a wave that swamped the fishing vessel Andrea Gail killing the crew of six.

I have been through a few times in my life when I felt like the Andrea Gail caught in the perfect storm. Tossed about on raging waves of several devastating life events rolling in at the same time.

A struggling marriage complicated by overwhelming financial pressures intensified by the loss of your job. Or, a devastating health diagnosis following the news your teenager was caught with drugs at school on the heals of your car blowing an engine. Trouble comes in waves at times and forms the perfect storm that threatens to take you under.

Is there any hope for surviving such a when it blows into your life?

Paul thought so. In fact, he knew so because he had survived several shipwrecks on the stormy Mediterranean Sea. Once he was in a fierce storm on rolling seas and torrents of rain for two weeks without relief. Another time he was on the sea clinging to broken timber from his wrecked ship for a day and a half.

In those anxious and stress filled moments, Paul learned some life lessons or, should I say eternal life lessons. He learned that the God to Whom he had surrendered his life not only was well able to control his life but also well able to calm the storm. And before His God stilled the storm around him He first quieted the storm within him.

So when Paul wrote to the Corinthians, "No temptation(trial) has overtaken you except what is common to mankind. And God is faithful; he will not let you be tempted (tried, tested) beyond what you can bear. But when you are tempted, (tried, tested) he will also provide a way out so that you can endure it." I Corinthians 10:13 he had learned from harrowing experiences that the God Who controlled him also had control of the storm!

And when he declared, "And we know that in all things God works for the good of those who love him, who have been called according to his purpose." Romans 8:28 he had been through some storms and learned that a good God has the power to make a super storm into a stepping stone!

After enduring beatings and stoning and shipwrecks and storms and snake bites and imprisonments and betrayals and abandonment and now chained to a Roman guard awaiting execution Paul was able to rise above the storm of doubt, defeat and despair to testify "And the peace of God, which transcends all understanding, will guard your hearts and your minds in Christ Jesus." Philippians 4:7

Do you know that peace?

Have you surrendered control of your life to the God Who controls the storm?

And while the storm rages around you tossing and threatening will you ask Him to still the storm within you until He chooses to calm the storm around you?