The Need To Belong

"About noon the following day as they were on their journey and approaching the city, Peter went up on the roof to pray.  He became hungry and wanted something to eat, and while the meal was being prepared, he fell into a trance. He saw heaven opened and something like a large sheet being let down to earth by its four corners. It contained all kinds of four-footed animals, as well as reptiles and birds. Then a voice told him, “Get up, Peter. Kill and eat.”  “Surely not, Lord!” Peter replied. “I have never eaten anything impure or unclean.” The voice spoke to him a second time, “Do not call anything impure that God has made clean.” This happened three times, and immediately the sheet was taken back to heaven."  Acts 10:9-16 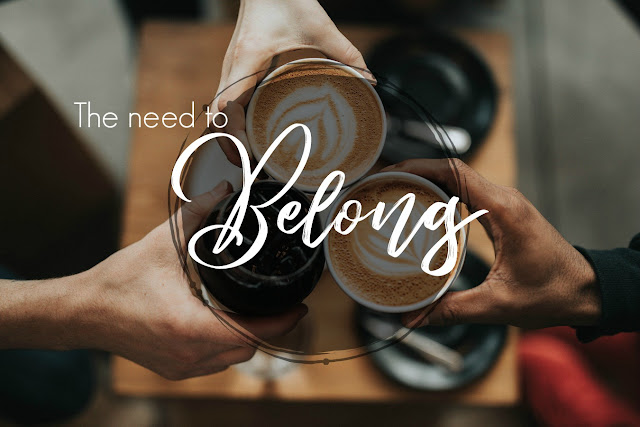 God was preparing Peter to help an entire new group of people belong to the Faith and particularly, the Church.

Belonging is a very important and necessary thing for everyone. It is essential to the human psyche and soul. The breakdown of the family over the past several generations has only intensified that need.
While the need for belonging is evident, the dynamics of it are not so clear. I think our look into the "Me to We" mindset has given me some fresh insights that have been helpful. When I find something helpful I like to share it!

What is involved in belonging? What needs to happen in order to feel like you belong?

There is a "Me" aspect to belonging and there is a "We" aspect to it. Belonging involves acceptance but it also involves commitment. Here is how it works:

Obviously, you or I cannot belong to something unless we are accepted into that group by the members. Acceptance is a warm welcome. Acceptance is permission to enter the group. You can't really be part of a group until the group allows you to join it.

Of all the groups that are available for people to belong to, a local church should be among the most welcoming. Anyone who comes to worship at a local church should find an immediate and sincere acceptance from the members of that body. No one should ever leave a worship service with the feeling they were not accepted.

Acceptance is essential but it is not enough. No matter how accepting a group is and regardless of how warm the welcome, a person doesn't belong until he is willing to commit to belonging and submit to its ways.

If you were to read on to the "rest of the story" followings Peter's vision of the clean and unclean animals you will see that Peter did extend acceptance to Cornelius and his family as God commanded. That obedience and acceptance allowed God's Spirit to work in a powerful way. But, then it became incumbent on Cornelius and the other Gentiles to respond with a commitment. Acts records that they did! They believed and were baptized and as a result, truly belonged to the Faith and the Church!

Acceptance is the role of the "We" in belonging and that acceptance should be as sincere as possible. But in order to belong, there must be a commitment made to the "We" by the "Me".

In my considerable experience in local churches, those who struggle to belong struggle as a result of a "Me" problem rather than the "We" problem. If you are not willing to commit and to submit to the group you will have trouble belonging.

Does that make sense?

Posted by Pastor Brad at 8:15 PM No comments: