Allow me to paraphrase this portion of I Corinthians 13:7 – “God’s Affection Is Your Protection”.

The word translated “protect” means “to cover”. You cover what you want to protect don’t you!

But the truth of this expression of love is much more comprehensive that just protecting something physically, it also has the connotation of protecting emotions and reputations. Nowadays we would express it like this, “I’ve got your back!”

To illustrate this I want to refer to the very example of how God’s love protects:

“The Lord God made garments of skin for Adam and his wife and clothed them. And the Lord God said, “The man has now become like one of us, knowing good and evil. He must not be allowed to reach out his hand and take also from the tree of life and eat, and live forever.” So the Lord God banished him from the Garden of Eden to work the ground from which he had been taken. After he drove the man out, he placed on the east side of the Garden of Eden cherubim and a flaming sword flashing back and forth to guard the way to the tree of life.” Genesis 3:21-24

Keep in mind Adam and Eve had just rebelled against God through deliberate disobedience. Every good and perfect plan God had in mind for these two was now rendered impossible because their sin had broken fellowship with Him. Their sinful act had such devastating consequences that we are still suffering from them. They were so devastating Jesus suffered for them!

But despite their rebellion and fully aware of the destructive impact they would have on humanity for the rest of time, look how God demonstrated His love and mercy through the ways He protected them! Check it out!

1) He made clothing to cover the shame of their nakedness!

God had their backs! (And fronts)

2) He sent them out of the Garden to protect them from the tree of life!

Decisions have consequences and their consequence was to be banished from Paradise. But when you read this in context you see that even though it was a punishment for their sin, God still protected them! In His mercy He kept them from access to the tree of life so they wouldn’t eat from the tree and become forever condemned in their sin. God diminished the impact of their consequences and protected them from themselves!

God had their backs!

3) He placed angels to guard the entrance into the Garden!

Angels are often associated with the role of protecting God’s people. That is precisely what they were doing here. They were protecting Adam and Eve from their own flawed judgment and corrupted heart.

God’s love “covered” them with mercy and grace!

If you will commit yourself to Him today He will have your back! He will protect you from your greatest threat – yourself!

An Amazing Treatise On Faith

"Therefore, the promise comes by faith, so that it may be by grace and may be guaranteed to all Abraham's offspring—not only to those who are of the law but also to those who are of the faith of Abraham. He is the father of us all. As it is written: "I have made you a father of many nations."He is our father in the sight of God, in whom he believed—the God who gives life to the dead and calls things that are not as though they were. Against all hope, Abraham in hope believed and so became the father of many nations, just as it had been said to him, "So shall your offspring be."Without weakening in his faith, he faced the fact that his body was as good as dead—since he was about a hundred years old—and that Sarah's womb was also dead. Yet he did not waver through unbelief regarding the promise of God, but was strengthened in his faith and gave glory to God, being fully persuaded that God had power to do what he had promised. This is why "it was credited to him as righteousness." The words "it was credited to him" were written not for him alone, but also for us, to whom God will credit righteousness—for us who believe in him who raised Jesus our Lord from the dead. He was delivered over to death for our sins and was raised to life for our justification." Romans 4:16-25 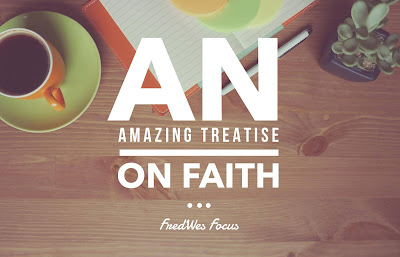 I was reading in Romans 4 this morning. What an amazing treatise on faith! Hebrews 11 has always been the "Faith Chapter", but this chapter is strong! Let me see if I can help you get your heart and mind around it.

Abraham believed what he couldn't see. He trusted for something he had never see before. He was committed to a Higher Reality.

Why did he do that?

Because of a promise from God - "Against all hope, Abraham in hope believed and so became the father of many nations, just as had been saint to him, 'So shall your offspring be.'" V. 18

Faith is believing what you have never seen - seeing with your spirit - because you trust the promise of God.

Why did he behave that way? He believed in the Person of God.

If you say you believe it is going to rain but you leave the house without your umbrella, you are not acting like someone who really believes. True belief, faith, expresses itself with action.

To say that you believe that the Bible is God's Word demands that you actually read it, know it, and live according to its truths. If the Bible doesn't shape your behavior, you are not a believer.

And because he believed and behaved like a believer - God believed in him.

The power to become is founded in the power of God that raised Jesus from the dead. Abraham's faith was amazing because not only did he experience God's power prior to the Resurrection, he believed it before Jesus was even born!

Abraham became a literal father, but because he believed and behaved as a man of faith, God made Him a spiritual father. If you could look up faith in God's dictionary you would find a picture of Abraham because to God, Abraham = faith.

God counted Abraham as the righteous father of a great nation, even when he was childless.

God loves it when, by faith, we become what He has designed us to become!

It was out of the faithfulness of Abraham that the Hebrew people became a nation. And it was out of this nation that Jesus was born. So not only is Abraham the example of faith, he is the father of THE Faith.

How is your faith?

Do you believe in God's promises?

Do you behave in a manner consistent with His Person?

Are you becoming like like Jesus by His power?
Posted by Pastor Brad at 12:20 AM No comments: