"In those days there was again a large crowd, and they had nothing to eat. He summoned the disciples and said to them, “I have compassion on the crowd, because they’ve already stayed with Me three days and have nothing to eat. If I send them home hungry, they will collapse on the way, and some of them have come a long distance.” His disciples answered Him, “Where can anyone get enough bread here in this desolate place to fill these people?” “How many loaves do you have?” He asked them. “Seven,” they said. Then He commanded the crowd to sit down on the ground. "Taking the seven loaves, He gave thanks, broke the loaves, and kept on giving them to His disciples to set before the people. So they served the loaves to the crowd. They also had a few small fish, and when He had blessed them, He said these were to be served as well. They ate and were filled. Then they collected seven large baskets of leftover pieces.   About 4,000 men were there. He dismissed them and immediately got into the boat with His disciples and went to the district of Dalmanutha."  Mark 8:1-10 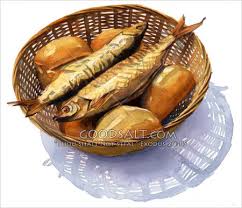 No, I am not talking about the 1,000 fewer people. That is obvious!

Here is the what I noticed, in this account the bread and fish belonged to them! In the feeding of the 5,000 they had borrowed lunch from a lad. This time it was THEIR lunch they donated.

You have to believe their willingness to give up their own lunch must have been made easier with the memory of the previous mass feeding! The disciples had a little more invested in this miracle but still, their offering was not exactly a great sacrifice.

This miracle is an example that big things can happen when a few people are willing to give a little. Their donation hurt a little but it also helped a lot!

When were reminded of that this year at FredWes!

Last Summer when God put it upon our heart to take the challenge of raising money to finance the drilling of a well in a remote African village, the good folks of the FredWes family promised to donate money toward the $8,500 goal. Whatever donations they pledged were to be above their regular tithes. They were not to sacrifice local giving obligations to meet this overseas outreach goal. So, the commitment to "FLOW H2O" would represent at least a little more than they normally give.

Sure enough, as the year went by and we did a little more, we saw God do a lot! We learned the lesson of the 4,000 - when we all do a little more God can do a lot more!

Posted by Pastor Brad at 9:15 PM No comments: