"One of the seven angels who had the seven bowls full of the seven last plagues came and said to me, “Come, I will show you the bride, the wife of the Lamb.” And he carried me away in the Spirit to a mountain great and high, and showed me the Holy City, Jerusalem, coming down out of heaven from God. It shone with the glory of God, and its brilliance was like that of a very precious jewel, like a jasper, clear as crystal." Revelation 21:9-11 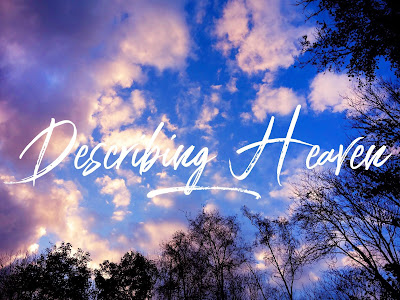 Well, I finally got around to actually talking about Heaven! You may be thinking, "It's about time!"

I will do my best to present you with as clear of a view as possible but like much of Revelation there are as many questions raised as there are answers given within the cryptic descriptions offered.

But in the Apostle John's defense, heaven is too awesome to describe but to amazing to deny! Too spectacular to imagine but too certain to ignore!

I'm sure you have had moments in your earthly life that defy description so imagine how hard it would be to describe a vision of Heaven?

How do you put into words the first time you saw the face of your newborn child and heard the cries? There are no words for that are there?

What about the sense of awe you experienced watching the sun rise over the ocean or set behind the silhouette of the Blue Ridge mountain range? How do you describe that? Are there adjectives to accurately express those emotions?

Years ago I was enjoying dinner with family at a restaurant on a pier on the San Francisco Bay in Sausalito, California. We watched as the setting sun reflected off the San Francisco skyline across the Bay and literally illuminated it with a golden glow! For the space of maybe ten minutes I got a glimpse of the sort of brilliance John attempts to describe in this passage.

That must be what John was struggling with as he tried to write down what the angel was revealing to him during his vision of Heaven.

This city gleamed with the brilliance of the beauty of the holiness and the glory of God! It was a the purest whitest light that he had ever seen! If you were able to stack up the purest pile of precious gems to be found on earth and they were to catch the glare of a noonday sun, you may be able to relate to what John saw that day!

John must have been a little frustrated as he searched in vain to conjure words descriptive enough to express what he saw and what he felt in those glorious moments of the Revelation! And while he did the best he could under the inspiration of the Holy Spirit I believe his ultimate goal is to awaken a longing within us to want to see it for ourselves!

I want to see it some day!

I have made myself ready through the grace of God in Christ Jesus to someday see that city with my own eyes!