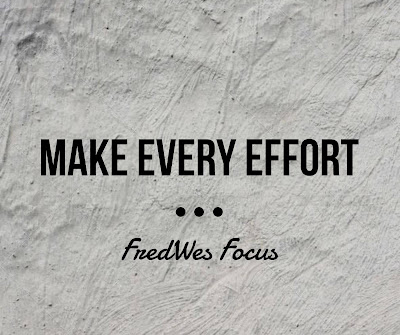 Let me ask you a question, "What sort of an effort did Jesus make for you?"

"In your relationships with one another, have the same mindset as Christ Jesus: Who, being in very nature God did not consider equality with God something to be used to his own advantage; rather, he made himself nothing by taking the very nature of a servant being made in human likeness.And being found in appearance as a man he humbled himself by becoming obedient to death—even death on a cross!" Philippians 2:5-8

"Then Jesus was led by the Spirit into the wilderness to be tempted by the devil. After fasting forty days and forty nights, he was hungry." Matthew 4:1-2

"He withdrew about a stone’s throw beyond them, knelt down and prayed, “Father, if you are willing, take this cup from me; yet not my will, but yours be done.” An angel from heaven appeared to him and strengthened him. And being in anguish, he prayed more earnestly, and his sweat was like drops of blood falling to the ground."  Luke 22:41-44

That sure sounds like a total effort to me!

"As they were going out, they met a man from Cyrene, named Simon, and they forced him to carry the cross. They came to a place called Golgotha (which means “the place of the skull”). There they offered Jesus wine to drink, mixed with gall; but after tasting it, he refused to drink it.  When they had crucified him, they divided up his clothes by casting lots. And sitting down, they kept watch over him there. Above his head they placed the written charge against him: this is jesus, the king of the jews. Two rebels were crucified with him, one on his right and one on his left. Those who passed by hurled insults at him, shaking their heads and saying, “You who are going to destroy the temple and build it in three days, save yourself! Come down from the cross, if you are the Son of God!” In the same way the chief priests, the teachers of the law and the elders mocked him. “He saved others,” they said, “but he can’t save himself! He’s the king of Israel! Let him come down now from the cross, and we will believe in him. He trusts in God. Let God rescue him now if he wants him, for he said, ‘I am the Son of God.’” In the same way the rebels who were crucified with him also heaped insults on him."  Matthew 27:32-44

Jesus gave His all until the very end. His entire life was characterized by total effort!

Are you making every effort to grow in grace?

How does your effort compare to His?
Posted by Pastor Brad at 10:28 PM No comments: