"David said to the Philistine, “You come against me with sword and spear and javelin, but I come against you in the name of the LORD Almighty, the God of the armies of Israel, whom you have defied. This day the LORD will deliver you into my hands, and I’ll strike you down and cut off your head. This very day I will give the carcasses of the Philistine army to the birds and the wild animals, and the whole world will know that there is a God in Israel. All those gathered here will know that it is not by sword or spear that the LORD saves; for the battle is the LORD’s, and he will give all of you into our hands.”  I Samuel 17:45-47 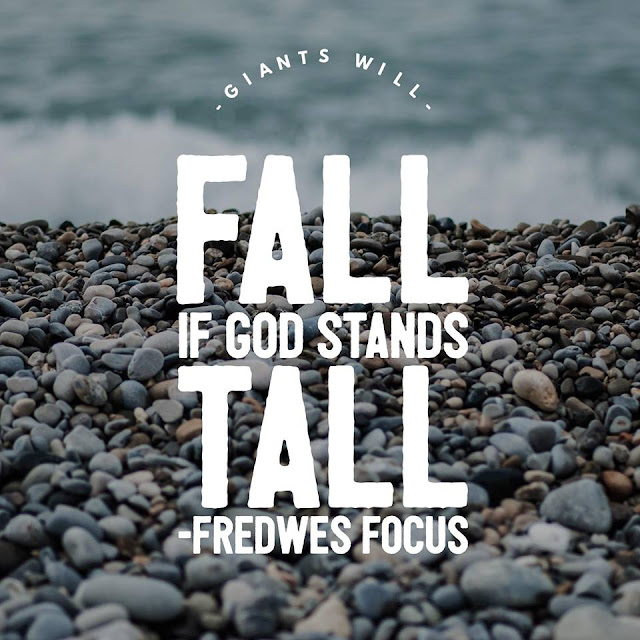 What should I expect of God?

I can show you what David expected. He expected that God put a giant in front of him so he could demonstrate that He is a giant God!

The old saying. "The bigger they are the harder they fall" certainly applies to God. Some powerful enemies have opposed Him and He stands undefeated. According to what I read in the back of the Book, He will remain undefeated for ever!

That is THE big question, isn't it?

Here are a couple of obvious answers from reading this story.

First, David spent his time focusing on God while Saul and his soldiers had been focused on Goliath.
It matters where you fix your focus!

David, as a shepherd, spent his days watching sunrises and sunsets and full moons and constellations of stars. His constant focus was on the beauty and grandeur of God! The more you gaze at God, the better He looks!

As for the Army of Israel, they had been subjected to the sights and sounds of a seriously large and loud Philistine warrior. Seeing this imposing enemy while listening daily to his taunts and curses had taken a toll on their faith and taken their focus off God.

Is there a giant hovering over your life?
Has it taken a toll on your faith? Have you found yourself more focused on that giant than on God?

Second, David's expectations of God came out of his personal experience with God. All the time he had spent with God in the remote areas where he tended sheep had allowed him to get to know God well. When he was lonely and called upon God, God came. When he was frightened and called upon God, strength and courage came. When a lion attacked his flock, God's power came and enabled him to slay the lion. And when a bear came after his sheep, he was given a godly strength to kill the bear.

Your expectations of God will reveal a lot about your experience with Him. If you are losing in your personal spiritual battles you will have difficulty ratcheting up your expectations against your giant.

Where do you need to trust Him in your personal battles?

Where is the focus of your life?

"Then Jesus was led by the Spirit into the wilderness to be tempted by the devil. After fasting forty days and forty nights, he was hungry. The tempter came to him and said, “If you are the Son of God, tell these stones to become bread.” Jesus answered, “It is written: ‘Man shall not live on bread alone, but on every word that comes from the mouth of God.’ ”Then the devil took him to the holy city and had him stand on the highest point of the temple. “If you are the Son of God,” he said, “throw yourself down. For it is written:“‘He will command his angels concerning you, and they will lift you up in their hands, so that you will not strike your foot against a stone.’” Jesus answered him, “It is also written: ‘Do not put the Lord your God to the test.’”  Again, the devil took him to a very high mountain and showed him all the kingdoms of the world and their splendor. “All this I will give you,” he said, “if you will bow down and worship me.” Jesus said to him, “Away from me, Satan! For it is written: ‘Worship the Lord your God, and serve him only.’”  Then the devil left him, and angels came and attended him." Matthew 4:1-11

Pride is ever lurking within the human heart ready to shut you in and shut others and God out.

Pride seeks to make you self-sufficient and independent.

So, powerful are these that before He began His earthly ministry Jesus had to overcome these three temptations.

In two previous posts I referenced how Jesus stood against the temptation to misuse His power for selfish reasons and how He turned down the scheme to gain Him instant fame and prestige.

The third temptation was an offer of a prized possession. "Again, the devil took him to a very high mountain and showed him all the kingdoms of the world and their splendor. “All this I will give you,” he said, “if you will bow down and worship me.” Jesus said to him, “Away from me, Satan! For it is written: ‘Worship the Lord your God, and serve him only.’”

There is a certain irony in One Who gave up everything dear and precious to Him and yet would be tempted by the offer of gaining possessions. So, there must be more to it.

God had given Adam dominion over the kingdoms of the world but when Satan deceived him and lured Adam into disobedience Satan usurped Adam's dominion. Adam no longer held the keys to the kingdom but Satan did. The Second Adam would have to win them back.

So, therein lies the power of this temptation. Satan was in a position to hand Jesus a painless shortcut to regaining the kingdom. He could have gotten back the keys of the kingdom and avoided the cross. But in so doing He would have disqualified the Second Adam.

Jesus answered the temptation with truth. Once again He rebuked and repudiated Satan with Scripture.

This gives us clearer insight into Hebrews 4:15: "For we do not have a high priest who is unable to empathize with our weaknesses, but we have one who has been tempted in every way, just as we are--yet he did not sin."


Just like you, Jesus faced the temptations that come from power, prestige and possessions. But unlike you He resisted them. But because He understands how you struggle He also knows how to help you.