"Instead, speaking the truth in love, we will grow to become in every respect the mature body of him who is the head, that is, Christ." Ephesian 4:15
It is heart-breaking to see the division and dissension in our nation over the recent Executive action placing a three-month ban on immigration from seven middle-eastern nations.
Even the Church I love and have dedicated my life to has published an official position paper opposing this action by President Trump. As much as I love The Wesleyan Church it doesn't speak for me on this issue. I want to share this article from a fellow Wesleyan pastor, Jim Garlow, that reflects my position and the rationale for that stance. While it is lengthy, it is worth the read. 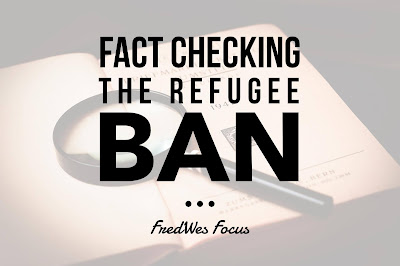 After seeing a lot of the posts about the refugee ban I felt it was time for a little fact checking and clarity about this issue:
Let’s look at the FACTS:
1. The 90 day ban does not extend to Indonesia, India, Bangladesh, or (inexplicably) Pakistan. These are the largest Islamic population centers in the world. I’m not exactly sure how the connection could be made about Muslims being targeted by Trump but if you read the actual executive order (it’s readily available on CNN or online for you to read) there is no mention of any faith or for that matter any country, other than Syria. More on this later…
2. Obama implemented a SIX MONTH BAN from Iraqi refugees in 2011. No outcry there by the media, of course, because it was Obama doing it and not Trump. By the way, Jimmy Carter banned Iranian refugees during his administration, too... a specifically targeted country by an American President. Again, no media outcry there. People are acting as if this is the first time something so egregious has ever been done in modern American history. I’m sorry, but that just isn’t true.


3. The seven countries being reported by the mainstream media as affected by the ban are: Iraq, Syria, Iran, Sudan, Libya, Somalia, and Yemen. Funny thing, though, you can’t find a mention of any of those countries (except Syria) in Trump’s Executive Order. It isn’t there. None of them.


So how did those particular countries get singled out?

I pray that God the Holy Spirit will give my brothers and sisters in my beloved Wesleyan Church grace to disagree agreeably so we can remain focused on the task of reaching our world for Jesus Christ.

I also pray for wisdom for President Trump and his advisers that they can devise an immigration policy that will keep the terrorists out while making it easier for refugees to come to the U.S.A.
Posted by Pastor Brad at 9:15 PM No comments: