"Our Scriptures tell us that if you see your enemy hungry, go buy that person lunch, or if he’s thirsty, get him a drink. Your generosity will surprise him with goodness. Don’t let evil get the best of you; get the best of evil by doing good." Romans 12:21 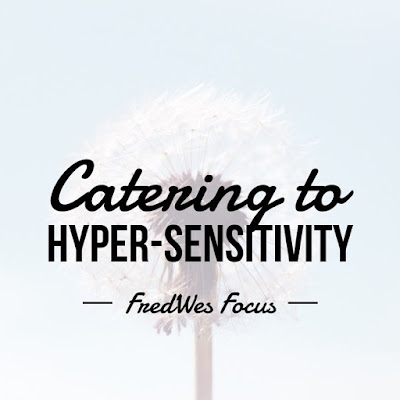 We received some very encouraging news today but you may not have heard it reported as the news media stayed focused on President's Trump handling of the fatal protests that erupted in Charlottesville Saturday.

What was the good news?

The good news is that North Korea has backed away from their threats to launch missiles at Guam. Though it won't portrayed as such it is a nice foreign policy win for President Trump.

In my previous two posts I have commented on some dangerous ideologies that helped fuel the violence in Charlottesville Saturday but were missed in the reporting by the media.

History revisionism and intolerance are two dangerous factors contributing to the chaos of that fateful day.

A third factor at play in the riot was hyper-sensitivity. What do I mean by that term? I mean someone who is easily offended or, in this case a group of people, who often feel threatened by people and by ideas or images they disagree with.

This is closely related to intolerance and may be another form of it.

If they hear an idea that is new to them or they disagree with, and rather than engage it with a discussion or debate they protest against it and seek to get it outlawed, banned or destroyed so they don't have to deal with it.

These are the people who where in Charlottesville demanding the removal of the Confederate statues because they we offended by what they represent.

The effective result is a tyranny of the easily offended. They demand that others must understand how they feel and insist they not offend them. At some point the fear of offending others has a paralyzing effect. You have to be very careful of what you say and what you do and to some extent what you think. That's a lot of power to hold over others!

As you watched the horrific events unfold on Saturday you saw what happens when society caters to the whims of the hyper-sensitive minority. Allowances are made that aren't in the best interest of the mainstream or, for that matter, those who are being catered to.

There was a day that society didn't give that much power to easily offended people. For most of my life the majority made the rules and those who disagreed or where offended were expected to adjust.

Unless we see this trend reversed we will continue to so ugly events like the chaos in Charlottesville.