So Called "Errors" of Scripture #1

"Jesus answered, "It is written: 'Man does not live on bread alone, but on every word that comes from the mouth of God.'" Matthew 4:4 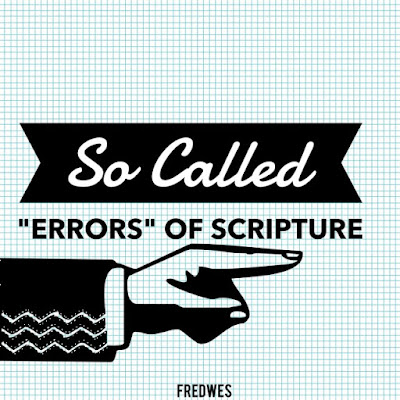 I am glad that Jesus said "every word". I am also glad that He didn't say, "Man does not live on bread alone but on almost every word that comes from the mouth of God."

Apparently, Jesus believed in the inerrancy of the Word. Evidently He was confident that the Word of God was inspired and reliable.

Alex McFarland, in his book "The Ten Most Common Objections to Christianity" says, "Biblical writers use phrases such as 'Thus saith the Lord' or "The word of the Lord came to me saying.....' at least 600 times. In total, there are around 3,000 references of the Bible as a whole, or at least a part of it, as being the Word of God. Keep in mind that none of the writers collaborated on their works. This wasn't a Bible Boys Club where everyone brainstormed book ideas. There were years - sometimes centuries - between writers. Yet it is obvious that each scribe understood the divine interpretation behind other books."

Who would recognize divine inspiration more than one who had experienced it himself?

So, why do some doubt its inspiration? Why are there those who claim it is filled with errors? What are their objections?

Let me deal with some of the so called "errors" of Scripture.


Skeptics sometimes raise the topic of Cain's wife (Gen. 4:17). So, where did Cain's wife come from? Were there other races of people that the Bible fails to mention? Did aliens come down from a far away galaxy and mingle with humans? Huh? What about that, huh?

What do you say we start with the obvious? Cain married one of his sisters.

But doesn't that violate the biblical commandment against incest? Huh? How about that, huh?

No! The command from Moses that prohibited marrying a close relative did not come until at least 400 years later.

Interesting how these skeptics who often want to under mind the Scriptures in order to banish the foundations of absolute morality, suddenly become moral guardians when it suits their purposes.

"Every promise in the book is mine, every page, every verse every line......."
Posted by Pastor Brad at 8:16 PM No comments: