Experience a Giant, Expect a Power

"David said to Saul, “Let no one lose heart on account of this Philistine; your servant will go and fight him.” Saul replied, “You are not able to go out against this Philistine and fight him; you are only a young man, and he has been a warrior from his youth.” But David said to Saul, “Your servant has been keeping his father’s sheep. When a lion or a bear came and carried off a sheep from the flock, I went after it, struck it and rescued the sheep from its mouth. When it turned on me, I seized it by its hair, struck it and killed it. Your servant has killed both the lion and the bear; this uncircumcised Philistine will be like one of them, because he has defied the armies of the living God. The LORD who rescued me from the paw of the lion and the paw of the bear will rescue me from the hand of this Philistine.” Saul said to David, “Go, and the LORD be with you.”  I Samuel 17:32-37 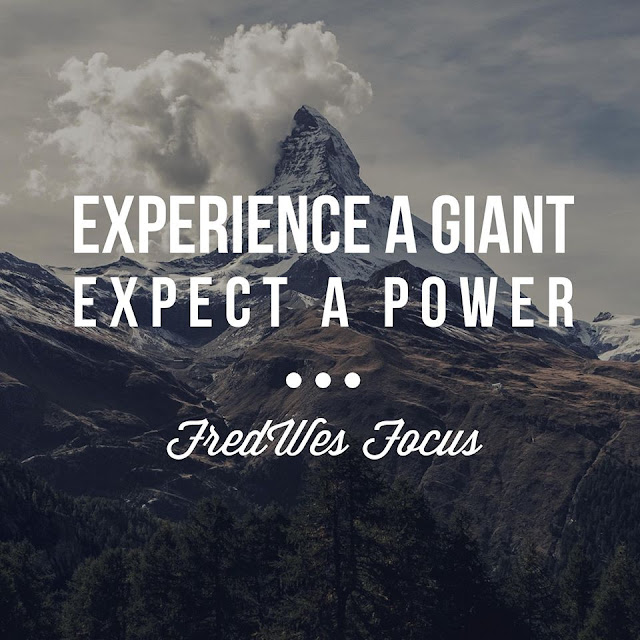 When confronted with a giant you can expect your gigantic God to demonstrate His power to deliver you!

David did and He did! Goliath didn't.

But that is not where the expectations ceased.

David expected more from God. He expected that had God confronted him with a giant to raise up the giant that was within him.

Once as David was tending his father's sheep a lion attacked the flock and carried off a sheep. Boldly, in the power of God, David pursued the lion, grabbed it by it's mane and killed it! Little shepherd boys don't kill lions. It just doesn't happen - but it did! When the lion confronted him it raised up an inner strength he didn't realize he had!

Just as David mentioned to King Saul, what God had raised up in him through the lion and the bear, God would also raise up against the Philistine, Goliath! It was his expectation based upon his experiences!

Here is a lesson for you: Just as God promised in I Corinthians 10:13, "He will not allow you to be tempted beyond what you are able". In other words, you can expect that God will not allow you to be confronted by a giant until He has helped you slay a lion and/or a bear. You can expect that He will help you experience some smaller victories before he allows the giant to show up.

So, if you are staring at a giant, you can expect His giant-killing power to rise up within you! You will stand, the giant will fall and He will be glorified!

Experience Him and expect it!