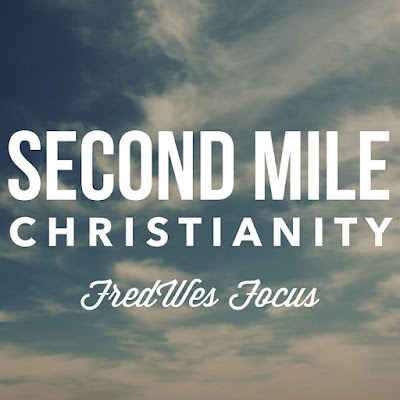 I read this on ESPN written by the Rick Reilly. This is a touching story and a perfect picture of what a church should be - second mile Christianity.

They played the oddest game in high school football history last month down in Grapevine, Texas.

It was Grapevine Faith vs. Gainesville State School and everything about it was upside down. For instance, when Gainesville came out to take the field, the Faith fans made a 40-yard spirit line for them to run through. Did you hear that, the other team's fans?

They even made a banner for players to crash through at the end. It said, "Go Tornadoes!" Which is also weird, because Faith is the Lions.

"I never in my life thought I'd hear people cheering for us to hit their kids," recalls Gainesville's QB and middle linebacker, Isaiah. "I wouldn't expect another parent to tell somebody to hit their kids. But they wanted us to!" And even though Faith walloped them 33-14, the Gainesville kids were so happy that after the game they gave head coach Mark Williams a sideline squirt-bottle shower like he'd just won state. Gotta be the first Gatorade bath in history for an 0-9 coach.

But then you saw the 12 uniformed officers escorting the 14 Gainesville players off the field and two and two started to make four. They lined the players up in groups of five—handcuffs ready in their back pockets—and marched them to the team bus. That's because Gainesville is a maximum-security correctional facility 75 miles north of Dallas. Every game it plays is on the road.

This all started when Faith's head coach, Kris Hogan, wanted to do something kind for the Gainesville team. Faith had never played Gainesville, but he already knew the score. After all, Faith was 7-2 going into the game, Gainesville 0-8 with 2 TDs all year. Faith has 70 kids, 11 coaches, the latest equipment and involved parents. Gainesville has a lot of kids with convictions for drugs, assault and robbery—many of whose families had disowned them—wearing seven-year-old shoulder pads and ancient helmets.

So Hogan had this idea. What if half of our fans—for one night only—cheered for the other team? He sent out an email asking the Faithful to do just that. "Here's the message I want you to send:" Hogan wrote. "You are just as valuable as any other person on planet Earth." Some people were naturally confused. One Faith player walked into Hogan's office and asked, "Coach, why are we doing this?"

And Hogan said, "Imagine if you didn't have a home life. Imagine if everybody had pretty much given up on you. Now imagine what it would mean for hundreds of people to suddenly believe in you." Next thing you know, the Gainesville Tornadoes were turning around on their bench to see something they never had before - hundreds of fans. And actual cheerleaders!

"I thought maybe they were confused," said Alex, a Gainesville lineman (only first names are released by the prison). "They started yelling 'DEE-fense!' when their team had the ball. I said, 'What? Why they cheerin' for us?'"

It was a strange experience for boys who most people cross the street to avoid. "We can tell people are a little afraid of us when we come to the games," says Gerald, a lineman who will wind up doing more than three years. "You can see it in their eyes. They're lookin' at us like we're criminals. But these people, they were yellin' for us! By our names!"

Maybe it figures that Gainesville played better than it had all season, scoring the game's last two touchdowns. Of course, this might be because Hogan put his third-string nose guard at safety and his third-string cornerback at defensive end. Still.

After the game, both teams gathered in the middle of the field to pray and that's when Isaiah surprised everybody by asking to lead. "We had no idea what the kid was going to say," remembers Coach Hogan. But Isaiah said this: "Lord, I don't know how this happened, so I don't know how to say thank You, but I never would've known there was so many people in the world that cared about us."

And it was a good thing everybody's heads were bowed because they might've seen Hogan wiping away tears. As the Tornadoes walked back to their bus under guard, they each were handed a bag for the ride home—a burger, some fries, a soda, some candy, a Bible and an encouraging letter from a Faith player.

The Gainesville coach saw Hogan, grabbed him hard by the shoulders and said, "You'll never know what your people did for these kids tonight. You'll never, ever know."

And as the bus pulled away, all the Gainesville players crammed to one side and pressed their hands to the window, staring at these people they'd never met before, watching their waves and smiles disappearing into the night.

At FredWes we are committed to being used by God to transform people into winners. Second-mile Christianity does that because it is love that's to big to miss. Are you ready to love people to life like this?
Posted by Pastor Brad at 9:21 PM No comments:

"After this many of his disciples quit following him and did not accompany him any longer. So Jesus said to the twelve, “You don’t want to go away too, do you?” Simon Peter answered him, “Lord, to whom would we go? You have the words of eternal life. We have come to believe and to know that you are the Holy One of God!”  John 6:66-69

I was thinking back over my experience of following Jesus and realized it has been almost 60 years since I began following Him.

Following Jesus is a day-by-day, moment-by-moment decision to continue following Him even when there is strong physical, emotional or spiritual pressure to unfollow Him.

Obviously, since I have followed Jesus for parts of seven decades there have been many opportunities for me to unfollow Him.

I mentioned several of those pressure points or unfollow moments that cause us to decide if we should continue following or not.


I have faced many of those "unfollow" moments during my life-long journey with Jesus. They have been difficult and even gut-wrenching at times. But at each point I have come to the same conclusion Peter came to in these verses:

Lord, to whom would we go?

You have the words of eternal life.

We have come to believe and to know that you are the Holy One of God!

Like Peter, every time for nearly 60 years whenever I have struggled with an "unfollow" moment I have made one or all of these declarations of faith.

It worked for Peter!

It has worked for me!

It will work for you!

Posted by Pastor Brad at 5:30 AM No comments: