"Two rebels were crucified with him, one on his right and one on his left.  Those who passed by hurled insults at him, shaking their heads  and saying, “You who are going to destroy the temple and build it in three days, save yourself! Come down from the cross, if you are the Son of God!”  Matthew 27:38-41

Easter celebrates the greatest event in history the Resurrection of Jesus Christ!

I wonder why we don't get more excited about our Savior arising from the dead to give us victory over sin and death?

Not to be morbid but think about the person whose death causes you the most sorrow and grief. Now think about having that person back alive with you to never die again. I'm guessing you would celebrate that!

But when Easter rolls around you get more excited about bunnies and baskets and bonnets and brunches than you do about a Savior who came back from three days in the grave to conquer sin and death forever. Why is that?

Perhaps we lose sight of the significance of this supernatural event. I fear I am guilty of it as well. As I was searching the Bible this week God led me to this rather unusual portion of Scripture and shared a few insights with me. I want to take a few minutes to share it with you and hope it will bless you as it blessed me.

First, realize the essence of the lie - "save yourself"

The mocker's taunts give several insights into reasons you might be less excited about the Resurrection.

If you believe it is possible to save yourself you would not be excited about the Resurrection. Why should you if don't believe you need a Savior?

The belief that you can save yourself and don't really need a savior is the essence of sin. Lucifer said to himself, "I can be like God." Later, he tempted Eve, "You will be like God." Believing that would not excite you about the Resurrection.

If you believe you should save yourself from sin or  suffering you would not be excited about the Resurrection.

By the way, in this story Jesus shows you how to respond to mockers. Jesus remained silent and stayed on the cross. He didn't try to retaliate nor did He attempt to defend Himself. In three days He would make a mockery of their mockery when He arose from death and proved them wrong.

Second, realize the essence of love in this story is seen in the fact that Jesus did not come off the cross but hung there to die for the very sinners who were mocking Him. He gave Himself He didn't save Himself.

What a vivid illustration of loving people to life!

Here at FredWes we are called not to save ourselves but to give ourselves to those He wants to save! We will sacrifice for them and if necessary suffer for them.

Love stays on the cross.

Love is more focused on saving others than saving themselves.

People who know what it is to love love the Resurrection!

Third, the essence of life is seen in this story - dying on the cross. Jesus gave Himself to save others. He had to die so they could live. But He also had to die in order that He could live the Resurrection life, the everlasting life.

The Resurrection meant a LOT to Jesus! It was a BIG deal because He died!


It will mean a lot to you unless you believe you can somehow save yourself. If saving yourself from needless suffering or sacrifice is your motivation the Resurrection holds little interest to you.

But if you are willing to take up your cross like Jesus and suffer.

If you are more concerned about saving others than saving yourself.

And if you are willing to die to your self-interest, self-centeredness and selfishness then you can experience the resurrection life. You can't truly know life until you die to self and arise to life in Christ!

"When they had crucified him, they divided up his clothes by casting lots. And sitting down, they kept watch over him there.  Above his head they placed the written charge against him:    this is jesus, the king of the jews.  Two rebels were crucified with him, one on his right and one on his left.   Those who passed by hurled insults at him,  shaking their heads and saying, “You who are going to destroy the temple and build it in three days, save yourself! Come down from the cross, if you are the Son of God!”  Matthew 27:35-40 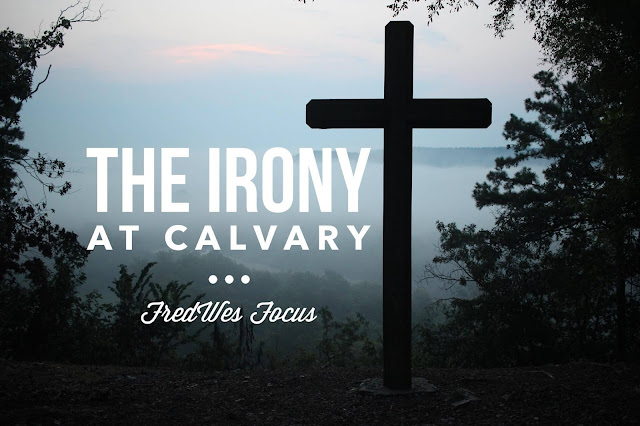 Few places in the Scriptures will you find more irony than in this encounter between the Master and the mockers. It is a sharp contrast between His holy nature and their haughty hatred toward Him.

When you take note of their accusations and slander you are exposed to the nature of evil at its core.

First,
the very fact that they are slandering the sinless Son of God gives evidence of a corrupted heart. Why would you do that otherwise?

Let's look at their verbal assaults directed His way.

"You who are going to destroy the temple and build it in three days"
- in saying this they are implying that Jesus is either a liar or a lunatic for suggesting such a thing. Also, they are effectively calling Him a failure at the most vulnerable times of His life. For what purpose? To what end?

For the record, Jesus was referring to His Body not a building.
And He did indeed rebuild it when He walked out of the tomb on Easter Sunday!

"if you are the Son of God!”
- again, here are these evil men casting doubt on the claims of Christ. If you will remember, this phrase strangely similar to other attacks by Satan the Accuser at various times in Scripture. While the devil is extremely evil he is also entirely unoriginal.

God is under no obligation to prove Himself to Satan or anyone else!
If the grandeur of creation and the countless miracles He has wrought from the beginning up to the moment of these mockeries haven't proved the true nature of Christ nothing He would do then could convince them!

Here again is the ugly, futile and arrogant nature of sin. The very notion that you can "save your self is the essence of sin! It is the lie that brought down Lucifer and Adam.

In conclusion I call your attention once more to the irony that they very thing they were doing was the very reason Jesus was on the cross dying!

What a blessing for them He ignored their taunts and remained on the cross!

What a blessing for you and me as well!