“And when you pray, do not be like the hypocrites, for they love to pray standing in the synagogues and on the street corners to be seen by others. Truly I tell you, they have received their reward in full."  Matthew 6:5 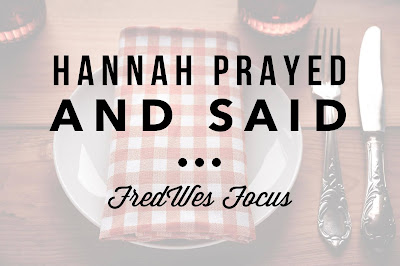 Jesus said when you pray you should pray sincerely. That means your prayers should be marked by humility, by honesty and they should be heartfelt.

Here is another classic example of a sincere prayer from the Old Testament.

Then Hannah prayed and said:

“My heart rejoices in the Lord in the Lord my horn is lifted high. My mouth boasts over my enemies, for I delight in your deliverance. “There is no one holy like the Lord; there is no one besides you; there is no Rock like our God. “Do not keep talking so proudly or let your mouth speak such arrogance, for the Lord is a God who knows, and by him deeds are weighed. “The bows of the warriors are broken, but those who stumbled are armed with strength. Those who were full hire themselves out for food, but those who were hungry are hungry no more. She who was barren has borne seven children, but she who has had many sons pines away. “The Lord brings death and makes alive; he brings down to the grave and raises up. The Lord sends poverty and wealth; he humbles and he exalts. He raises the poor from the dust and lifts the needy from the ash heap;he seats them with princes and has them inherit a throne of honor. “For the foundations of the earth are the Lord’s; on them he has set the world. He will guard the feet of his faithful servants, but the wicked will be silenced in the place of darkness. “It is not by strength that one prevails; those who oppose the Lord will be broken. The Most High will thunder from heaven; the Lord will judge the ends of the earth. “He will give strength to his king and exalt the horn of his anointed.” I Samuel 2:1-10

This is the pray of a barren and desperate woman whose only hope was in her God. So, she offered this humble and honest and heartfelt prayer to her God.

Meditate on this prayer.

What can you learn?

Can you be this honest and humble with the barren area in your life?


Are your prayers as heartfelt as this one?

By the way, this prayer was answered!