I Want a Righteous Nation

"Righteousness exalts a nation, but sin is a disgrace to any people." Proverbs 14:34

This is a very straight forward statement. It is very simple and yet quite complex.

I would think that if you ask the average citizen of any nation, "Would you rather have your nation be righteous or disgraced?" My guess is that most of them would say, "I want a righteous nation!"
While righteousness is important to any nation, it is absolutely essential to the United States! 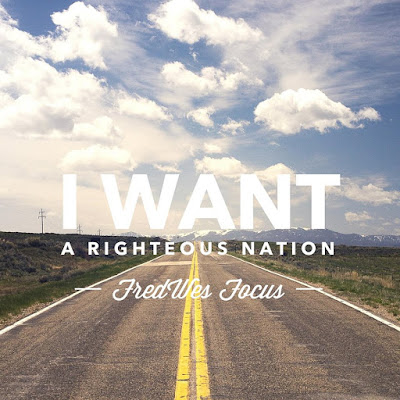 Rights have as much to do with responsibility as they do with freedom. In a sense, that what righteousness is - the responsible exercise of freedom. The responsible exercise of freedom means doing what God says is right! How can you hope to maintain your rights if you do what God says is wrong? Unrighteousness is therefore, a direct threat to freedom! When you under mind what is right you under mind your rights!

Think about that if you think that righteousness does not matter.

As a very simple example remember what happened when you were a child and you did something wrong. When your parents discovered you had done wrong you were punished and that punishment involved some sort of loss of freedom. Maybe you were grounded for a day or maybe you had to go to your room for an hour or two - your "unrighteousness" caused you to lose (if only temporarily) some rights.

What happened on a very small scale in your home is a microcosm of what happens on a national scale when unrighteousness becomes epidemic.
More great empires have crumbled from within due to the moral and cultural decay resulting from rampant unrighteousness.

In addition to the Holy Scriptures, many of the Founding Fathers cautioned against immoral and irresponsible actions of unrighteousness!
Doing what is right is essential to keeping America free and strong. Not only does righteousness protect freedom (and it does) more importantly it earns God's favor and blessing. There is no substitute for that!
Wonder what is wrong with American? Unrighteousness is what is wrong with America!

Do you want to get America right again? Then do right by obeying God and living according to His Word!
Posted by Pastor Brad at 10:54 PM No comments: